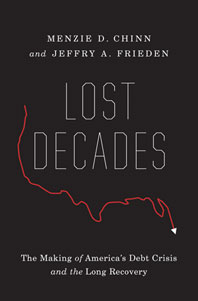 future scholarship will help us understand better the mix of opaque financial innovations, agency problems in financial institutions, regulatory laxity and capture, and other components of the dynamic that contributed to the depth and breadth of the crisis. But the macroeconomic sources themselves also suggest some major analytical questions of direct relevance to those interested in political economy -- none of which, to my knowledge, have been addressed convincingly by scholars. Herewith a simple catalogue:

1. What explains the division of the world into surplus and deficit countries? This was not a typical flow of capital from rich to poor nations: much of the capital flowed from poor to rich nations. Nor is it fully explained by demographic factors driving different savings rates, for in many instances the surplus savings of many surplus-saving countries are themselves the result of national policy. The same puzzles suggest themselves about the major borrowers: why did the United States and the United Kingdom shift so quickly from net creditors to net debtors?

2. What drove the striking macroeconomic and financial developments of the post-1995 period? To what mix of electoral, economic, technological, and special-interest constraints and opportunities were policymakers and financiers responding?

4. Why was it so difficult for governments of the booming economies to begin adjustment before the crisis hit? From at least 2003, there was continual academic and policy discussion of the global imbalances, with a broad consensus that they were unsustainable and that they would cause serious problems. Yet virtually no government acted upon these warnings. General enjoyment of the good times is not a particularly convincing explanation, for there is ample evidence that politicians that preside over serious crises pay a major price. And yet a failure to adjust in time during a borrowing boom is the rule, not the exception.